Continuing our exploration of the status of online gambling in Scandinavian states, we’ve arrived in Finland, the country that houses the happiest nation in the world, has all the sauna you can handle, health care for all, northern lights and also some weird competitions such as wife-carrying.

Finns adore gambling and belong in the top five gambling nations across the globe. There are plenty of online casino players among Finnish residents, and for them, CBM has compiled this overview of the best casinos and banking methods online for Finnish players.

Many would argue that simply saying that gambling is popular in Finland would be an understatement. Finland’s gambling scene is very dynamic and exciting, more so online than offline. There is open access to all popular internet gambling games, from slot machines and sports betting to scratch cards, lottery, card games and other table games.

This page is dedicated to thousands of aficionados of online gambling and gaming in Finland, people looking to play high-quality games and chase lucrative payouts while exploring the best casino and banking options available. The top-ranking, reputed and trustworthy online casinos in Finland have been our subject of interest, so we share our results here, all the while paying special attention to the recommendable banking methods on offer.

As we all know, gambling can be addictive and when it becomes irrational, people enter the risks which are much higher than any of the risks they would take if they were gambling responsibly. To prevent this, the Finnish government decided to regulate gambling activities across the country and put the majority of the sites and gaming houses operating in the country under the management of governmental institutions. In a way, gambling in Finland is a state-owned monopoly system, but also a good model which benefits the players and the country as a whole.

If operators wish to enter and set up a gambling business in the Finnish market there have to adhere to a set of limitations established by the local government gambling monopolies and the current legislation. The key legal document that regulates gambling services in Finland is the 2011 Lotteries Act which covers all betting forms and gambling activities in the state. In December 2021, the Finnish Gambling Law reform was approved, introducing a payment blocking scheme as a new feature. The National Police Board might compile a payment blocking list in 2022 that will include online gambling companies infringing the Lotteries Act. The “black list” refers to payments being blocked from Finnish inhabitants to the companies on it, not vice versa.

The legislation requires operators to have a government-issued license. Veikkaus Oy, the sole provider of the national lottery, sports betting and instant win games (scratch cards) has a government-issued license. Other entities that operate legally are RAY, responsible for providing land-based gambling, and Fintoto Oy, which controls pari-mutuel horse racing. These three entities merged in 2016 and are considered to be one operation. Aland Province is the only exception in the sense that it is controlled by a fourth organization known as PAF. The Finnish model is known as the “3+1” system.

Finnish government considers legal only online gambling sites that are run by PAF and RAY. However, Finnish citizens find it easy and simple to access online casinos that are based outside of Finland. Even though international operators are not allowed to set up their businesses inside the country, players are not facing any restrictions that would ban them from active sites accepting players from the Scandinavian region. These sites are not allowed to advertise directly to consumers based in Finland, but individual players are not blocked from accessing them and playing for real money.

The current state of things sees offshore operators capturing a large share of the market. As mentioned earlier, even though foreign companies are not allowed to advertise in Finland or set up their business in the country, no law prevents players from accessing foreign gambling sites. While the change in attitude in favor of re-regulation is a positive step for Finland, no concrete moves have been made in that direction yet. There have been mentions of perhaps finding inspiration in Swedish or Danish licensing models.

An updated gambling law came into force in January 2022. Its main takeaways are strengthening responsible gambling measures while maintaining the existing monopoly system. There are also plans of issuing payment blocking orders against iGaming companies in violation of the reformed Lotteries Act.

Casinos accepting Finnish players are either licensed by the Finnish government or by foreign entities that have been recognised by the industry. All the casinos recommended by CasinoBankingMethods.com at least, you can be sure of that. International operators servicing Finnish customers have an increased presence on the market and their websites are mostly licensed by regulators such as MGA, UKGC, Alderney or Gibraltar. Curacao also appears from time to time, but Malta is probably the most frequent license issuer you will encounter playing at Finnish online casinos.

Sites licensed by the UK Gambling Commission have gone through strict criteria for licensing sites, so you will be engaging in a secure experience and the highest level of player protection will stand behind your every real money wager. You may also see sites with a license from Isle of Man, which is also a solid regulator. Any of the mentioned regulatory bodies make sure that sites adhere to gambling laws and meet the criteria for the provision of secure gambling online. Furthermore, modern online casinos sites are bound to have firewall technology built in to prevent cybercrime and potential data theft. By playing at highly rated online Finnish casinos, you will have all these things covered and won’t have to worry about a thing. 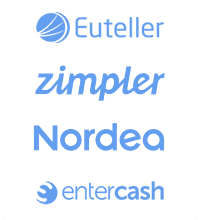 Finnish online casinos are designed with Finns in mind, meaning they will not only offer software and games popular among Finnish players but also deposit and withdrawal methods that Finnish online punters find to be the best. Banking services can be good even if they come offshore from providers used to operating in international environments. Nevertheless, it is always good to keep in mind local payment methods, as they usually prevail.

The reasons why local payment options are typically found more suitable over universal banking solutions are their convenience, accessibility and being affordable. Finns are likely to be familiar with options such as Euteller, Entercash and Zimpler, which is why many Finnish-oriented casinos offer them. Other excellent methods to consider using are Google Pay, Apple Pay, Trustly, Nordea and Pay by Phone, among other options. Casinos that accept online banking are particularly attractive to players using Suomen Verkkomaksut, a brand specialising in e-payments approved by the government. Finnish people are some of the most tech-savvy on the planet which makes e-wallets and online banking options the perfect fit for topping up gambling accounts.

Finns use the Euro as local currency, sometimes also SEK. The great thing about using Euros for online transactions is that the number of casinos online accepting Euros is enormous. You can’t go wrong with picking out a EUR online casino since you will be paying without any conversion fees, which, as we all know, can be quite disruptive. You can be in full control of your budget by using a locally-optimised banking method and domestic currency. Remember to always check your prospective casino’s terms and conditions associated with their offered banking options, just to make sure that there aren’t any hidden charges involved.

As a Finnish player, am I taxed on my winnings?

There are no tax implications for winnings from gambling in Finland. However, if your winning comes from wagers made on events run by non-EEA companies, certain taxes might be applied.

How do I deposit at Finnish casino sites?

The available payment methods depend on the online casino that you choose. Many of them provide options for using e-wallets, credit/debit cards and bank transfers. You can also use Nordea, Euteller or Zimpler at various casino sites – just sign up, go to the cashier and follow the instructions to make a quick deposit.

Are there any casino bonuses that I can claim in Finland online casinos?

Sure! There are no restrictions regarding receiving online casino bonuses in Finland. It is best, however, to check with your chosen casino operator which promo deals are at your disposal. The most popular of the bonus offers are deposit bonuses, no deposit bonuses, and free spins bonuses.

Can I get problem gambling help in Finland?

There’s Peluuri which offers peer support, self-help tools and tips and ways to control gambling, plus several other major institutions such as Gamblers Anonymous (Gamblers Anonymous-ryhmä), GamCare and GambleAware, to name a few. These are all trusted organisations you can turn to if you feel you have been gambling irresponsibly.

What is the legal age to gamble at online casinos in Finland?

You need to be at least 18 years old to be able to gamble legally at online casinos in Finland.

Can I play online casinos on mobile in Finland?

Yes, you certainly can. Most Finland casinos offer an app or a mobile-responsive website, both bringing you convenience, security and privacy. Just make sure you are connected to a secure and strong Wi-Fi signal.

Most casinos that offer their website in the Finnish language also offer support in Suomi. However, the support in Finnish may not be available 24/7, and also not at every Finland-oriented casino. Check the support times and also consider contacting support in English as an alternative.