Reviewing market after market, we’ve come to one of the most interesting countries in Europe. The Dutch nation is known for being hedonistic and liberal and gambling fits into that profile quite nicely. Our guide on the Netherlands market will specifically focus on online casinos servicing Dutch players and banking methods available to players from Holland.

Our goal is to provide an updated set of unbiased reviews and ratings so that all our Dutch readers can have the best time playing casino games online for real money.

As you have already concluded by now, gambling is a great way to relax. At online casinos, you can even win worthy prizes. Why wouldn’t you play online casino games in Holland for real money? However, you shouldn’t just randomly join an online casino and start depositing. You need to have at least basic knowledge about the gambling laws in your country, as well as the safety of specific online casinos and their banking policies.

Hopefully, the following article will give all the information you need! We’ve studied the Dutch online gambling market and we’ve come to a series of conclusions presented here on this page. If you care about the most suitable casinos online for Dutch players and the most efficient payment methods for deposits, your search ends here.

The online gambling legal landscape in the Netherlands is quite an interesting phenomenon. The country has relaxed laws about various social activities, including drugs, prostitution and abortion, for example, yet online gambling is something that has been a challenge for lawmakers and administrative bodies for years. The current situation is bound to change, though.

Currently, the gambling scene reflects a monopoly on national gambling activities held by Holland Casino. The Government of the Netherlands imposes tight control over the gambling sector. Profits from Dutch land-based casinos go directly to the Dutch treasury. Online gambling is considered, still, to be illegal. However, the Remote Gaming Act was first introduced in the House of Representatives in 2014. It was passed by the House of Representatives in 2016 and spent more than two years in the Senate to be finally approved by the Upper House of the Netherlands legislature in 2019. In November of the same year the Dutch gambling regulator, the Kansspelautoriteit (KSA), announced the Remote Gambling Act will enter into force in January 2021, whereas online casinos with Dutch licenses will start operating six months after. Around 90 KSA licenses are expected to be issued at that time.

The Remote Gambling Act will legalise online games of chance and will come as amendments to the Betting and Gaming Act, which initially defined the remote games offered on the Dutch territory.

The Dutch government has warned that the regulation of online games of chance in the Netherlands will be one of the most demanding regulations in the world. The fee to be paid to the Netherlands Gambling Authority for the application alone is €48,000. Local contenders for the license are Holland Casino, ZEbetting & Gaming, Fair Play Casino and Jack’s Casino, but international operators such as Bet365 and the like are expected to join.

Similarly to the Canada-Kahnawake situation, the Netherlands online betting market also includes the Curacao e-Gaming Licensing Authority, since it is located on the territory of the Netherlands Antilles. Curacao is part of the Dutch Caribbean and the aforementioned regulatory body is a well-known license issuer and regulator in the realm of web-based gambling services.

The Curacao e-Gaming Licensing Authority is one of the earliest regulators of web gaming activities. It issues a single license that covers all types of games of chance. For a company to obtain a Curacao license, it has to be registered under the Netherlands Antilles Chamber of Commerce as a legal entity, regardless of whether it is a local or an offshore company.

Overall, the Dutch government does not block its citizens from betting on foreign-based websites and there are hundreds of sites that accept gamblers from Holland.

One of the first steps you need to make when entering into online gambling is to find a foreign legal casino site that operates with a valid license accepts Dutch players.

Since the Kansspelautoriteit hasn’t started issuing licenses yet, you ought to focus on casinos that hold licenses issued by a legal authority in countries such as the United Kingdom, Malta, Curacao and Gibraltar. Curacao is home to a significant number of Netherlands-facing online operators.

Only these casinos can be considered trusted and only these types of casinos become shortlisted on CasinoBankingMethods.com. Most casino sites usually include this information at the end of their homepage, so make sure you scroll down and take a look before you register.

Look for the seal of approval and the license number. By doing this you will verify the legality of your chosen casino and you can then start playing without any concerns.

Up To €100 Live Blackjack Bonus

Up To €100 Live Blackjack Bonus 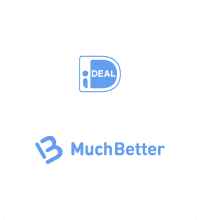 Interestingly, the Dutch market, while still officially and technically unregulated, allows most popular payment processors to successfully process gambling payments within the country. In other words, players located in the Netherlands are able to deposit and withdraw funds from their gambling balances using some of the most common and widely popular methods of payment. While this is a highly beneficial situation, we always take a moment to consider if there are any local banking methods that would make for an even better choice for players from a certain country. In the case of the Netherlands, it is iDEAL.

iDEAL is dominating the Dutch gambling community because it allows direct bank transfers from one’s existing bank account to the casino. As an electronic banking system, iDEAL fits the profile of a modern, convenient payment solution that is easy to use. It was introduced by a Dutch association called Currence in 2005 and it is focused on Dutch players exclusively, or to be more precise – on users who own accounts with the largest banks in the Netherlands.

The Netherlands is a member of the European Union, and as such has accepted the Euro as its official currency. This makes it even easier for Dutch players to gamble online since they can choose from hundreds of casino sites that support EUR, as well as all the top software providers and payment methods.

Players will not only be able to deposit and withdraw in Euros, but also benefit from the fact that all the bonuses are also playable in Euros. Gambling using the local currency is far more convenient for Dutch players than having to convert currencies first and possibly ending up paying exchange fees.

Is it legal for players in the Netherlands to play at online casinos?

The Netherlands has been in the process of creating a legal regulatory framework for online gambling for several years now. This, of course, includes wagering at online casinos and betting sites. After the enactment of the bill scheduled for summer 2021, interested online casino operators will be able to obtain licenses from the Dutch regulatory authority Kansspelautoriteit. Most operators currently present in the Dutch market are offering online casino services from offshore jurisdictions. It is not illegal for Dutch players to wager at offshore online casinos.

What are the best options for depositing money for Dutch casino players?

A lot of Dutch citizens use common credit cards for offline and online purchases. They are convenient and familiar. Another recommended deposit option is iDEAL, a system that is linked to all major Dutch banks and allows you to seamlessly transfer funds from your bank account to your online gambling account.

What is the minimum age limit to gamble legally in the Netherlands?

Players in Holland must be at least 18 years old to gamble at an online casino. Underage gamblers are not allowed to gamble at casino sites and will get their accounts blocked if identity verification reveals that they are younger than required.

What is the easiest way for Dutch players to make deposits to their gaming accounts?

There are many different methods available to Dutch players, from typical credits cards to e-wallet solutions and prepaid vouchers. Most of the Dutch-friendly websites will also allow players to top up their balance via iDEAL, since this solution provides many benefits to users from Holland.

How do I choose the best Dutch online casino?

For an enjoyable virtual betting experience, many things need to add up. The first thing to do is to check the casino’s variety of gaming options along with its legitimacy and if it has a license. You should also check the payment options that are accepted by the online casino and opt for a website that accepts the most convenient methods for you. The best Dutch casino online will also allow you to claim bonuses and deposit in your local currency.

Dutch players that win by playing at online casinos have nothing to worry about when it comes to taxes applied to their wins. The government in the Netherlands does not tax players, but the operators do have to pay an annual tax based on their gross gaming revenue.